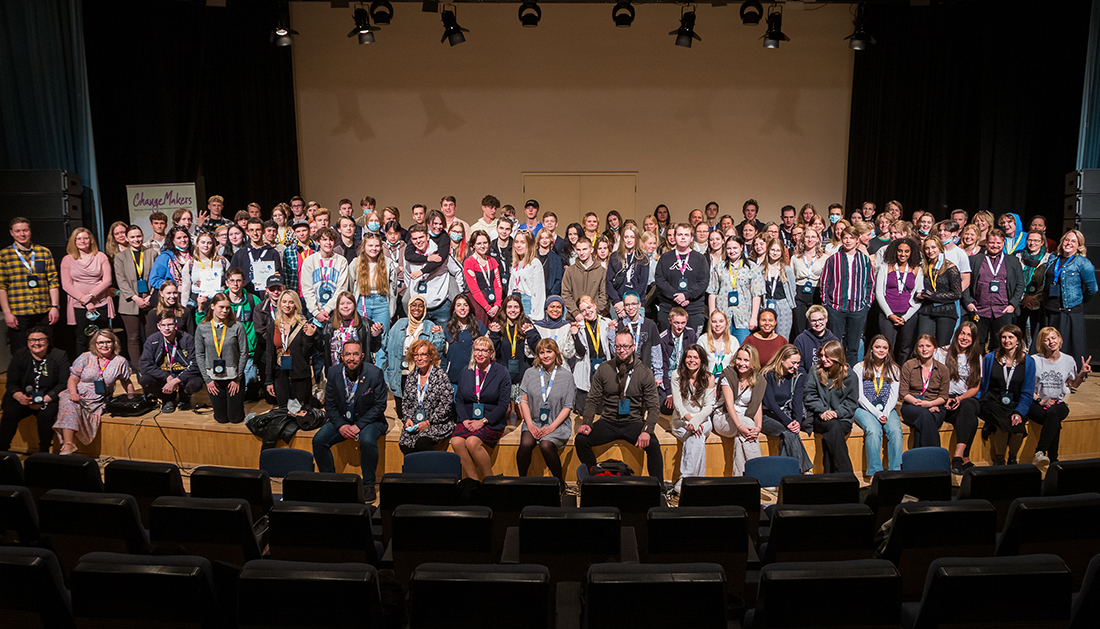 The event, which took place at the end of April, brought together students, teachers and project workers from all four participating countries, Finland (including Åland), Sweden, Estonia and Latvia . For six months, the students had been developing international startups to solve real-life environmental challenges posed by the companies.

At the Challenges to Business event, students presented their business ideas in the Rauma Hall, in front of the jury and other participants. The best teams were rewarded. The three-day event included a variety of other activities, including Amazing Race competition in the center of Rauma. SAMK has been responsible for the project’s communication and open learning platform ePlatform. In total, the project has had two rounds, with more than 250 participants.

All the countries of the Central Baltic are united by the same challenge: society and companies should act in accordance with the principles of sustainable development and support youth employment and entrepreneurship. Students’ business ideas are based on environmental challenges, presented by local businesses. The project connected 14-17 year old students and teachers from each country and they worked together with project mentors and companies, exploring the challenges of the circular economy and creating solutions for them. The project formed about 50 international start-up training companies during two rounds.

Main topics of the challenges, to which student teams were involved from the beginning of the project:

For students, the ChangeMakers project culminated in a three-day event in Rauma. The highlight of the event was the “Dragon’s Den” competition, which format was related to a famous TV show Lion’s cave. Students presented their business ideas in front of a jury, teachers, project workers and other student teams. After each performance, jury had the opportunity to ask questions or comment to the teams that performed on stage. The jury included professor Ilari Sääksjärvi (University of Turku), sales manager Venla Wiik (ResQ Club), entrepreneur Harri Ketamo (HeadAI), education coordinator Terhi Liettilä (Cycle) and entrepreneur Ivana Blanco Gross (RaumArs artist).

The first day of the event began on the Rauma campus of the University of Turku, at the Department of Teacher Education, with a welcome speech, an Emoji Quiz and a motivational speech by entrepreneur Harri Ketamo. Program also included a lecture on presentation skills and a final mentoring meeting of the students and their mentors. The mentors have worked closely with different student teams for two years and two rounds, arranging regular mentoring meetings and helping to complete the course assignments given in the project.

At the end of the first day the project staff organized a competition, called Amazing Race, in which the student teams toured around old Rauma with various activity points and visited local entrepreneurs’ shops to carry out tasks. After completing the race, they went to dine at the Osteria de Filippo, restaurant in a center of the city, after which they returned to the hotel to prepare for the next day.

The second day of the event started on the SAMK campus Rauma, in the Rauma Hall. It was time to show the results of the project – students presented their business ideas in front of the jury and almost full Rauma Hall in the Dragon’s Den competition. The students had prepared a three-minute video presentation that was shown first when the team took the stage. After that, the team had two more minutes to verbally clarify their own business idea with a so-called elevator speech. Then there was time for the jury to ask questions and give comments. Jury’s feedback to the teams was encouraging and positive, as the students had just been in front of 150 people performing and answering the jury’s questions in English! In general, the feedback was good, and for example ResQ Club’s sales manager Venla Wiik commented that performances were great and young entrepreneurs are brave and innovative.

Students shared their experiences after the event. As a result, they have learned a lot from the project and gained new skills for the future. For example Janica Nurminen and Ea Joensuu from Merikarvia high school mentioned that they’ve made new friends, learned presentation skills and their language skills got better. Their team had an idea of an application that motivates people to do eco-friendly actions every day, through gamification. Their idea won the Audience Award. Janica and Ea felt that communication in a foreign language with teammates online was challenging at first, however, the experience taught them to communicate better in English. Due to COVID-19 restrictions, the Challenges to Business event was the first time the team met face to face. Janica and Ea felt that their mentor was very helpful during the process and was always there for them. The project inspired Janica and Ea to be more interested in entrepreneurship, and an own company is possible in the future.