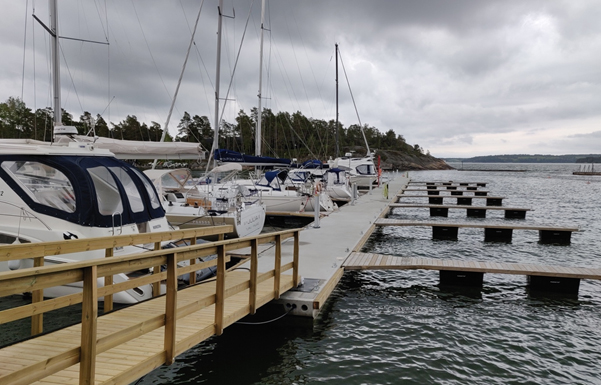 Satakunta University of Applied Sciences (SAMK) has worked on various projects in the Baltic Sea region in order to make this area more climate friendly and also to make boating and sailing more eco-friendly.

The project’s investments have been divided into 6 periods starting from March 2020 and it is scheduled to be done until November 2022 which is the final reporting deadline of the project.

One of the main fixed costs of the small ports is electricity. Therefore, managing the efficient use of electricity has been the CBSmallPorts project’s center of focus. In order to approach energy efficiency management, the project has done many climate-friendly investments to produce eco-friendly energy such as installing solar panels and to save energy by making different investments such as installing LED lightings in the small ports and there are many environmentally friendly investments still ongoing.

What investments have been done?

Generally, there has been a variety of energy efficiency investments in different small ports in the CB area depending on the ports’ atmosphere and their needs.

Making new piers in some small ports including Dirhami located in Estonia, is a part of CBSmallPorts investments. The idea is that by installing solar panels in the mentioned port, a part of the needed electricity used in the piers will be provided in more energy efficient and sustainable ways.

As it is mentioned, to improve energy efficiency and save energy, the project has provided some small ports with LED light stands, solar light systems, cost effective lighting and smart lighting. Also, the installation process is still ongoing in other small ports which need the mentioned investments.

CBSmallPorts has made major renovations in a few small ports including renovations of two saunas in Seili small port located in municipality of Pargas, Finland. The project’s team has replaced the old wood burning stoves with new and more energy efficient electric ones and one of the saunas has received major renovation where also the walls and the floors were renovated in order to decrease the energy losses. Also, the wastewater of the sauna is now treated in proper wastewater purification plant.

To mention the main investments made by CBSmallPorts project in different small ports which are either completely done or they will be completed during the project, LED light stands have been installed in Lennusadam, Estonia, a wind generator in Lõunaranna small port, Estonia, new heat pump based heating system in Kalev yacht club small port, Estonia ongoing installation of solar panels in Roograhu, Estonia, ongoing installation of smart lighting for harbor facilities in Kärdla, Orjaku and Sõru Marinas located in Estonia, walking decks at piers (iron frames / wooden deck maintenance, recast surface of one pier) in Bläse Kalkbruk small port, Sweden, solar energy and lighting as well as water system in Klacksörarna, Sweden, modernized power line and transferred line from air to the underground and to sea bottom across a bay in Keihässalmi small port, Finland, installation of piers and ongoing installation of solar panels in Airisto Marina, Finland, solar power plant and LED lighting services in Sapokka, Kotka, Finland and guest harbor area LED lighting in Tervasaari, Finland.

Overall, as a summary of what small ports CBSmallPorts project has been working on, the project is investing in 15 different small ports which some of the investments are still ongoing. The small ports are:

New ways of cooperating during the pandemic

CBSmallPorts’ project partners were supposed to share their knowledge and experiences during the process of energy efficiency investments and marketing. They had planned to involve each other in planning, decision makings, investments, installations and basically the whole process.

Due to the Covid-19 and the restrictions, this idea was not realized, and the partners were not able to have enough physical meetings and interactions. Also, it caused some delays in component deliveries of e.g., semiconductor components that are used in PV systems i.e., in solar panels. So, the team had to adapt to the new ways of cooperation to advance the investments of the project.

All partners in CBSmallPorts did their best in using online tools to communicate and advance the project and investments. In order to develop the project, they used new ways and gained new skills and experiences which will be useful in the future.

To have a better picture of the investments of the project, CBSmallPorts team has gathered the detail of all the investments and practical works done implementing them to a separate document which will be published during the autumn 2021. The document will be a report on practical work done within investing small ports and best practices for energy efficiency for small ports with investments (technical specifications, tendering, new technologies to use). Through the report, port developers can get a good idea of what kind of investments were done in different small ports, how the procedures went and what were the costs. The report will also present some lessons learned during the investment process.

Satakunta University of Applied Sciences (SAMK) has been taking environmentally friendly actions in the Central Baltic region by leading several national and international projects over the past few years.

CBSmallPorts is an international project started in June 2020 and led by SAMK with the focus on energy efficiency in the small ports of Central Baltic region as well as marketing activities. The project works on improving energy supply and its efficient use by boaters and small port users in the CB area.

In May 2021, CBSmallPorts started a social media campaign, collaborating with Sailing Fuga. Within this campaign, Sailing Fuga had a sailing trip to the small ports around the Baltic Sea region including selected small ports located in Finland, Estonia, Latvia and Sweden which was split in two parts. In general, the objective of this campaign was to raise awareness on the Central Baltic Sea, energy efficiency and environmentally friendly sailing as well as spreading a survey about energy efficiency of the small ports.

Sailing Fuga based in Rauma, aims to raise awareness on the Baltic Sea and show a different way of sailing. Sailing Fuga’s team had participated in different projects using environmentally friendly equipment and new sustainable technologies to make sailing safer and eco-friendlier.

In this collaboration project, Sailing Fuga’s main goal was to promote the small ports of CB area by exploring this region and taking pictures and videos for the social media campaign (Facebook, Instagram and YouTube) while sailing with energy efficient equipment to show a different way of sailing. Also, they had a live stream of their sailing adventure on their YouTube channel during the whole journey which gave them the possibility to show their route, share their thoughts on the journey, and to show how to tie the knots, etc.

During the trip, both Sailing Fuga and CBSmalPorts team shared the sailing adventure by posting pictures and videos of CB area and small ports on social media through the whole journey.

The CBSmallPorts team is collecting data from the small ports and after analyzing the survey the results will be published in a report during the autumn 2022.

Sailing Fuga had a lot of energy efficient equipment onboard. They had two separate solar power systems including 240Wp panel as well as two 280Wp panels installed for the expedition, so 800Wp solar power in total. They equipped their boat with a UP400 hydrogen generator backup power source and their main engine was the final backup for all the electrical equipment onboard. At last, they equipped the boat with a 700Ah battery bank which was powered by the power generating equipment.

They installed a measuring device powered by Finnish Meteorological Institute (FMI) in order to measure air and the sea’s temperature 24/7 and to automatically send the data based on their locations to FMI.

Overall, Sailing Fuga was provided with a variety of equipment from different energy supplier companies as sponsors. These companies provided Sailing Fuga’s team with the hydrogen generator backup power source, solar panel, battery bank and other environmentally friendly equipment which made their journey eco-friendlier.

The first part of the journey was during May 2021 starting from one of the small ports of Rauma. During this trip, Sailing Fuga explored throughout the coast of Southern Finland, Estonia, Latvia, Bornholm (Denmark), Southern Sweden and Åland Islands.

The second part was during the first half of August 2021. During the second trip, they explored the northern parts of the Baltic Sea. As the last destination of the trip, Sailing Fuga visited the small port of Gävle in Sweden and they familiarized with the port and the energy efficient investments which some of them had been made through PortMate project (another Central Baltic project before CBSmallPorts). After visiting Gävle, Sailing Fuga returned to Rauma across the southern part of the Gulf of Bothnia.

Within the exploration of the Central Baltic Sea, Sailing Fuga had to make changes to their plans due to the Covid-19. While visiting small ports of Sweden and Denmark, they were not allowed to get off the boat and get to the shores, so they had to end up rushing and return to Rauma earlier. Also, they had planned to visit southernmost part of the Baltic Sea and sail coasts of Poland and Germany as well but, due to the Covid-19 and restrictions they had to change the plan and skip this part entirely.

Overall, the Sailing Fuga experience was a great cooperation and a great opportunity for both Sailing Fuga and CBSmallPorts project to promote small ports of the CB area and improve the marketing of the ports as well as gaining more knowledge about the energy supplies and energy efficiency investments in this region.

64 bright young minds from over 30 countries tackled the energy transition. Our great team ”Energy Unlocked” won the award of the ”Most creative idea” with the project about sustainable energy communities of the future that emphasize the meaning of the end user.

The International Clean Energy Challenge, organised from 22-26 July 2019 in Upper Austria by the OÖ Energiesparverband, brought together 64 highly-qualified young professionals from more than 30 countries and 11 partner companies for an event of collaborative innovation.

I was selected from over 200 applicants to participate in the event. The participants selected were mostly young professionals working in businesses, industry, energy agencies, associations, public bodies and research institutions with a diversity of educational backgrounds including engineering, economy, architecture, business administration, chemistry, mathematics, law, political science and more.

My team was assigned to a specific company challenge given by Beckhoff. Work on the challenge consisted of a combination of brainstorming activities, autonomous group work and peer-review sessions. The company representatives were present throughout the entire event and offered valuable support and professional coaching.

We started off with a “world hugging, larger than life idea” that made us all feel confused of what we were actually aiming for. We had three days of intensive time to work. Luckily, the organizer had arranged many peer-review sessions with different techniques that made us prioritize our idea. We finished off with a clear idea that we were proud to present.

In the final session, each group presented its solutions to a jury consisting of management-level representatives of the partner companies as well as the regional energy commissioner. Awards were presented in 4 categories: ”Best presentation”, ”Most creative idea”, ”Strongest business opportunity” and ”Best solution for the company challenge” as well as for the best event photo.

The event was organised by the OÖ Energiesparverband, the regional energy agency and organiser of the annual international conference World Sustainable Energy Days. It was held also in the context of the NEFI project Indugrid.